Can lithium batteries be made safe for flight?

Written by Air Cargo World’s Linda Ball, it discusses the challenges facing cargo aircraft with regards to malfunctioning lithium batteries. Here are some of the extracts from the article. You can also view the entire article by clicking here.

“On Sept. 3, 2010, a UPS 747-400 cargo aircraft took off from Dubai, headed to the UPS hub in Cologne-Bonn. It crashed shortly after taking off, killing the two crew members on board. Three years later, the United Arab Emirates General Civil Aviation Authority (GCAA) concluded that the cause of the crash, a fire on board the aircraft, was started on the cargo deck. The UAE GCAA report stated that the fire began in the section of the cargo that included a “significant number of lithium type batteries and other combustible materials, and that the fire escalated rapidly into a catastrophic, uncontained fire.”

The UAE GCAA report on the UPS crash said “lithium batteries have a history of thermal runaway and fire, are unstable when damaged and can short circuit if exposed to overcharging. Once a battery is in thermal runaway it cannot be extinguished with the types of extinguishing agent used on board aircraft and the potential for auto ignition of adjacent combustible material exists.”

Malfunctioning lithium batteries were also the reason for the temporary grounding of the entire fleet of 787 Dreamliners in January 2013. After five incidents in five days, involving either the batteries or the electrical systems on 787s, All Nippon Airways and Japan Airlines (the biggest 787 operators at the time) voluntarily grounded their fleets, and soon aviation regulators worldwide made 787 groundings mandatory, until the problem was understood and resolved.

The result of these, and other, incidents is that today more than 18 carriers have banned the bulk transport of lithium batteries as belly cargo on passenger planes, and some have banned the cells on all shipments, including freighters. Passengers can still carry lithium battery-powered devices, such as laptop computers and cell phones, with them on board; but bulk shipments, capable of causing catastrophic fires, are increasingly unwelcome.

The effect on forwarders

Bassil Eid with FIATA (the International Federation of Freight Forwarders Associations) said the organisation’s members have experienced reluctance among air carriers to accept battery shipments, even when cargo to be tendered is fully compliant with current dangerous goods regulations. He acknowledged that some carriers won’t accept such shipments.

AmSafe Bridport, a U.K.-based business that develops engineered textiles designed for safety in the aerospace industry, conducted a full-scale test during which an FCC system successfully prevented a lithium-ion battery fire from spreading for six hours. The FCC is designed for full protection of a pallet load, and AmSafe also makes a separate fire-containment bag for use with smaller shipments. Both products provide passive protection from fire on board, which would give the crew time to make an emergency landing.” 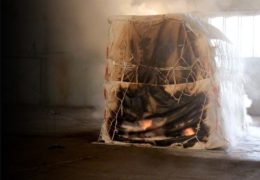