Sunscreen Keeps Drugs Out Of The Heat

Reports are being received that some distributors of pharmaceuticals have experienced large losses as a result of being unprepared for sudden temperature events such as the recent record-breaking heatwave in parts of South America. The latest triple-action air cargo covers from DuPont provide vital sun protection to pharmaceuticals that are exposed to potentially damaging solar radiation during their journey to market.

In recent months the world has witnessed a succession of temperature extremes generally attributed to global warming and believed to be part of a long-term pattern of greater weather severity and uncertainty. It is a trend that has not gone unnoticed by an industry that relies on being able to keep goods in transit under strictly controlled temperature conditions. “As the frequency and intensity of extreme weather events accelerates so does the need for improved temperature control of pharmaceutical products during their transportation to market, ” says coolchain expert Tony Wright of Exelsius Ltd, a respected coolchain consultancy.

One of the weakest links in the pharmaceutical coolchain, however, relates to a high incidence of solar radiation spikes during external air handling operations, a problem that is causing some manufacturers to switch from fast and efficient air carriage to the considerably slower sea freight; an option offering relatively poor traceability and flexibility. “Solar radiation is a prime cause of air-freight temperature excursions,” continues Tony Wright. “This is a huge issue for major pharma companies which at any given point in time will have millions of pounds worth of merchandise in transit across the globe. A single temperature excursion can wipe out the entire value of a shipment causing enormous commercial, logistical and reputational loss.”

This is the issue which the DuPont corporation is addressing with its new range of ‘triple action’ Tyvek® air cargo covers. These are lightweight ‘thermal blankets’ that provide a reliable and affordable means of protecting pharmaceutical products that must be kept within the ‘controlled room temperature’ (CRT) temperature band of +15°C to +25°C. in accordance with the latest EU legislation. The ‘passive’ Tyvek® solution employs a unique triple-action approach to temperature control which renders them a very effective and cost-efficient solution to CRT control.

During early validation tests for the Tyvek® covers DuPont observed first hand the significant, but oft-ignored, effects of solar radiation on palletised pharma products. Temperature spikes of up to 15°C above ambient were being regularly measured under normal outdoor conditions. Other similar direct sunlight tests have recorded surface temperatures as high as 70°C or more and these are temperatures that can be further magnified by local conditions such as the ‘mirror’ effect of nearby glass or metal clad buildings.

And the problem doesn’t stop there. The use of clear or black cargo coverings creates a very powerful ‘greenhouse’ effect as the sun’s rays are absorbed and trapped. This was another phenomenon observed in the Tyvek® validation tests. Temperature differences of as much as 43°C were recorded between clear shrinkwrap and Tyvek® when exposed to solar radiation during recent tests in Florida. This is because common packaging materials such as stretchwrap and bubblewrap can provide a ‘greenhouse effect’ by trapping heat and increasing the surface temperature of the pharma merchandise way beyond the surrounding air temperature. The triple-action Tyvek® air cargo covers restrict this solar heat gain because of its exceptional reflective properties in both the visible and infrared radiation wavelengths.

Aynur Rasulova-Rzepa is a Special Products Consultant and Manager at one of Dubai’s top cargo agencies, International Transport Services FZCO. In this Gulf city, summer temperatures in the shade are routinely in the mid-40s but can easily be several degrees higher than this during particularly hot spells. These, however, are the temperatures in the shade. Where pharmaceutical shipments are exposed to direct sunshine the surface temperature the product packaging can easily reach dangerous levels. “Many route qualification programmes rely on data derived from average ambient temperature conditions and fail to take into account the huge solar exposure effects that can be encountered during loading and off-loading operations, often the result of unplanned delays or disruptions,” says Aynur. “Even brief exposures and occasional sunny intervals can cause huge and surprisingly fast temperature spikes. For this reason we recommend using Tyvek® cargo covers as these provide shipments with a further line of defence against temperature excursions.”

The message is clear: pharmaceutical manufacturers and their logistics providers must not only be prepared for the possibility of accidental or unforeseen exposures to excessive ambient heat during the different phases of transport, they must also factor in the high risk of unforeseen or accidental exposure to high levels of solar radiation. 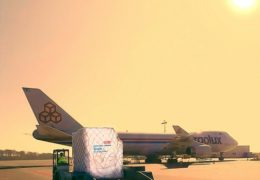