AmSafe Bridport® has further developed the Mantle™ product line into fire protection products specifically for the airframe structure, meeting the needs identified by major OEM’s. Mantle technology is now being utilised in the form of Fire Protection Liners (FPL), but also as Fire and Smoke Barriers (FSB). FSBs are used in both military and commercial aerospace to protect personnel from cargo fire and the resulting smoke toxins, enabling the aircraft to make a safe landing. Mantle technology is also being developed for use on electric urban air mobility vehicles.

Mantle FSBs are currently in service with the US Armed Forces and have proven particularly advantageous for providing a flexible Quick-Change solution. These circumstances require a fire and smoke barrier that can be changed out or moved to a different location within the aircraft with both speed and ease, such as with combi operations. This is a notable improvement compared to hard-mounted barriers that either do not allow for a reconfiguration or require excessive time and human resources to do so. In fact, Mantle provides such significant time and handling benefits that, within a military context, operators are now able to undertake a same-day configuration change to an aircraft mission without having to return to a secure maintenance base.

Within a commercial setting, the Mantle FSB offers similar advantages, and the weight savings provided by this flexible, engineered textile solution should also be considered when comparing them with solid barrier structures in both Military and Commercial settings. These have both become a key consideration for operators within the context of fuel savings and sustainability.
AmSafe Bridport designed the Mantle product range specifically to contain or protect aircraft, cargo, and crew from an on-board fire. Mantle can significantly minimise the risks and losses caused by fires through the transport of un-declared Dangerous Goods (DGs), and add an extra layer of protection during the transportation of declared Dangerous Goods such as standalone Li-Ion battery packs.

The first Mantle product was the Fire Containment Cover (FCC) which is available for use with both pallets and cargo containers. In the event of an on-board fire, the FCC (and FCB) allow smoke to escape and trigger active fire protection systems like alarms and sprinkles whilst still containing fire and allowing the crew the opportunity to commence emergency operations. This system significantly reduces the impact of fire on personnel, passengers, aircraft structure, and other cargo. The FAA and EASA have since awarded the Mantle FCC by AmSafe Bridport a Technical Standard Order (TSO-C203). Full-scale fire tests have shown that an FCC can contain a Class A fire for 6 hours. The FCC has subsequently evolved into Fire Containment Bags (FCB) and Skid Fire Containment Covers for specialised or bespoke requirements. These have been successfully tested with Li-Ion battery fires, generating heat over 1500°C. The Mantle range has grown further, including The FSB and FPLs, providing added layers of protection for your aircraft and personnel.

Further information about the Mantle fire containment and protection range can be found at www.amsafebridport.com/mantle/ or by contacting AmSafe Bridport directly at [email protected] or +44 (0) 1308 456666 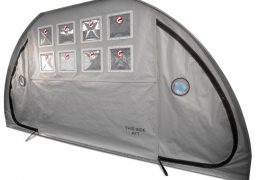