The Air France-KLM Group will be cutting down on its annual aircraft carbon dioxide emissions by using new lightweight cargo nets made with ultra-high molecular weight polyethylene (UHMwPE) fibre, manufactured by DSM Dyneema and branded as Dyneema®.

The use of just one new lightweight net with Dyneema® will save Air France-KLM-Martinair Cargo 210 gallons of kerosene fuel per year. That means CO2 emissions will be more than 2.5 tonnes less per net per year, according to the Atlanta-based Textile News.

Produced by AmSafe Bridport, the nets will in future be used on all aircraft operated by Air France-KLM-Martinair Cargo, the dedicated air cargo business of the Air France-KLM Group. It is the first major airline group to replace all cargo pallet nets, normally made in polyester (PET) fibre, with lightweight nets made with Dyneema®.

Air France-KLM-Martinair Cargo, AmSafe Bridport and DSM have been collaborating on development and testing of the lightweight nets for several years. They have succeeded in producing nets that weigh 9 kilogrammes, which is half the weight of a traditional net in PET fibre.

Said KLM CEO Camiel Eurlings:
“At Air France-KLM, we are fully committed to reduce our carbon footprint, and our efforts are being recognised. For the eighth year running, Air France KLM has come out at the top of the Dow Jones Sustainability Index in the airline sector.” 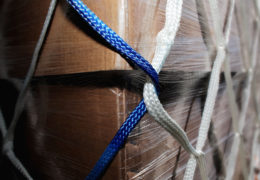