Have you got it Covered, Week 5

The first part of the temperature validation exercise involved conducting a series of static tests designed to measure the performance of the Tyvek® covers in both summer and winter conditions. The effects of prolonged exposure to the sun were also measured along with the ability of the covers to protect against cold.

These static tests were a vital part of the qualification programme since they were designed to explore and document the technical characteristics of the Tyvek® product. In other words, they identified the range of operating parameters under which the product will function effectively. The dynamic tests on the other hand were designed to demonstrate that the Tyvek® component functions as intended under real-life conditions as part of an overall coolchain system. These dynamic tests are not therefore devised in order to prove the operating envelope (although they may serve to do so if ‘out of specification’ conditions are encountered during the measured validation runs).

The OQ test programme was designed to measure the following product properties:

The Tyvek® qualification programme took particular recognition of the effects of solar radiation during the airport apron transferstep since this is widely recognised as the biggest weakness in the pharmaceutical coolchain. During the controlled tests on Tyvek® covers, and in virtually all independent trials, these damaging, but oft-ignored, solar effects were clearly evident. Direct sunlight can cause exposed surface temperatures to rise as high as 70°C or more and these are temperatures that can be further magnified by local conditions including the ‘heat island’ effects of solar-heated asphalt pavement and the ‘mirror’ effects of nearby glass and metal clad buildings. According to IATA, 57% of temperature excursions occur during these ‘uncontrolled’ air-cargo stages of the distribution process. During such intervals, pharma merchandise can be exposed to exceptional temperature extremes as a result of the ‘greenhouse’ effect of solar radiation, the very same heating phenomenon associated with global warming. And the resulting temperature excursions are not rare occurrences.

It has been estimated by one authoritative source that up to 5% of all transport events involve a temperature deviation from plan with external air handling operations, such as loading, unloading, marshalling and transfer, accounting for a high proportion of the temperature spikes encountered during the transportation of drugs.

In the past, many pre-qualification tests for cargo covers ignored this important phenomenon and relied solely on temperature profiles based on ambient temperatures when conducting risk analyses and undertaking performance tests. However, it is clear that, in practice, exposure to direct sunlight is a very common and very serious cause of temperature excursions and must be addressed accordingly.

To view Week 6 click here – The Danger of Stretchwrap 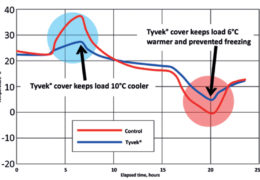