AmSafe Bridport > The Danger of Stretchwrap

The Danger of Stretchwrap

Have you got it Covered, Week 6

Initial trials on Tyvek® covers in India had shown temperature differences of as much as 25°C between standard stretch-wrapped pallets and identical pallets cloaked with Tyvek® covers when both were subjected to solar radiation over a 3-day period. Similar measurements were subsequently repeated in many other geographical zones in Europe, Asia and the Americas.

In another Tyvek® qualification test, four pallets of pharma products, two using Tyvek® covers and the other two covered with standard plastic stretchwrap, were temperaturemonitored throughout a six and a half day door-to-door shipment from Brazil to France. This journey involved wide ambient temperature fluctuations from as low as 5°C to a peak of nearly 40°C.

In this particular test the Tyvek® pallets remained within the desired 15°C temperature envelope throughout the test whilst, in contrast, both the stretch-wrapped pallets rapidly breached the predetermined temperature band. In fact some temperature sensors positioned within the stretchwrap pallets indicated, alarmingly, ‘out of limit’ temperatures for periods exceeding 24 hours. 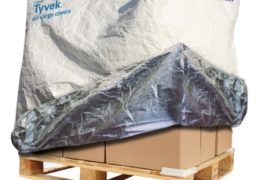