Have you got it Covered, Week 7

The static OQ trials compared the use of clear and black cargo coverings with Tyvek® to determine their relative behaviour under identical environmental stimuli. The results were striking. Transparent cover materials were found to exhibit an alarming degree of heat entrapment and magnification, the so-called ‘greenhouse effect’, as the sun’s rays were captured and trapped. Common packaging materials such as stretchwrap and bubblewrap did not provide any protection against solar radiation, but rather amplified its warming effects way beyond the surrounding “ambient” air temperature, and often to a potentially dangerous degree.

Similarly, black and coloured materials gained heat energy by absorbing the sun’s rays and increased the surface temperature of the ‘protected’ packages way beyond the surrounding “ambient” air temperature.

The Tyvek® air cargo covers, on the other hand, were found to sharply restrict this solar heat gain due to their exceptional reflective properties in both the visible and infrared radiation wavelengths.

Yet more OQ tests were conducted at the Atlas Weatherisation Test Facility in Florida during punishing ambient conditions in March 2013. This part of the programme also involved comparative tests against alternative cover materials and systems and again demonstrated the striking superiority of the Tyvek® covers especially under exposed, high solar-gain,‘tarmac’ conditions. Again, these tests showed that standard clear and black stretch-wraps, although cheap and widely used, tend to act like a greenhouse by trapping heat and continuously increasing the entrapped air temperature way beyond the surrounding ambient temperature. 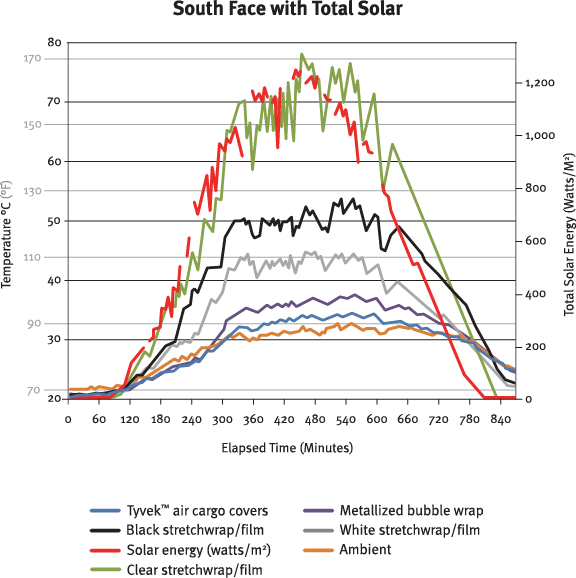