AmSafe Bridport Ltd is displaying Tarian® at DSEI, in London’s ExCel Centre from 10th-13th September 2013. This revolutionary, lightweight and durable Rocket Propelled Grenade (RPG) Armour System can be seen fitted to a Navistar MXT™-MV (Husky) vehicle in the Land Display Zone (stand br5). This is the first time Tarian® has been shown in service ready standard on this vehicle.

Following February 2013’s announcement that AmSafe Bridport had won the UK MOD contract for its Improved Rocket Propelled Grenade Protection requirement, AmSafe Bridport has been working on executing the contract which will see Tarian® RPG Armour System kits for a number of British military vehicle types delivered by the end of 2013. Tarian® has been in use in Afghanistan with the British Armed Forces since 2009.

Additionally, AmSafe Bridport continues to develop its relationships with global military vehicle manufacturers, such as Turkey’s FNSS Savunma Sistemleri A.S. (Defence Systems Inc.) and Singapore Technologies Kinetics of Singapore, with whom AmSafe Bridport has recently extended a Memorandum of Understanding. These relationships enable the highly effective Tarian® Armour Systems to be cooperatively developed and offered to customers either as original equipment or retrofit.

In response to the very significant international interest in Tarian®, AmSafe Bridport has expanded its Tarian® international marketing team with the establishment of a dedicated North America team and an expanded UK based team. The North America team is based at AmSafe Bridport’s Erie, Pa facility and is led by Chris Witts as Senior Sales Manager. The UK team has been strengthened with the appointment of Cindy Barfoot as Sales Manager, and Matt Aujla as Sales Engineer. Doug Stewart, Senior Sales Manager continues to lead the UK based team and is responsible for marketing Tarian® in all territories outside of North America.

Neal McKeever, Sales & Marketing Director of AmSafe Bridport, said:
“DSEI presents a fantastic opportunity for AmSafe Bridport to demonstrate Tarian’s unique adaptability to fit a wide variety of vehicle types, as well as fulfilling the requirement from the military for a lightweight, higher performance and more robust alternative to other RPG protection systems.” 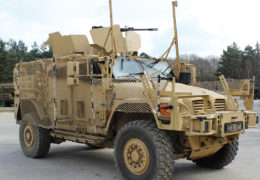