AmSafe Bridport Limited has won the Queen’s Award for Enterprise in Innovation for the company’s work in the design and development of Tarian™, a revolutionary system to protect armoured military vehicles against Rocket-Propelled Grenade (RPG) attacks.

The Tarian technology has been developed in response to a requirement from the military for a lightweight, higher performance and more robust alternative to traditional, heavy, metal bar armour RPG protection systems. The core element of the Tarian RPG defeat mechanism is an extremely strong textile net manufactured from high-tenacity fibres. Tarian nets are attached to vehicles using innovative flexible mounts that enable the system to withstand harsh vehicle operating conditions without sustaining damage.

Tarian has been deployed and proven in Afghanistan since May 2009, and its QuickShield bar armour repair kits, fitted to vehicles to replace damaged bar armour since April 2011.

Neal McKeever, Sales & Marketing Director at AmSafe Bridport Ltd, said:
“AmSafe Bridport is proud and honoured to be a recipient of a Queen’s Award of innovation for the development of its unique Tarian RPG protection technology. The culmination of seven years of co-development with the UK Ministry of Defence, Defence Science and Technology Laboratory (DSTL), Tarian is becoming globally established as the best performing, lightest and most robust solution for protecting vehicles against rocket propelled grenade attacks.”

In a speech delivered by the Minister for Defence Equipment and Support, at an event to mark Science & Technology Week on 18th March 2011, Peter Luff, stated:
“A revolutionary new form of textile armour on vehicles, called Tarian, has been developed by DSTL and AmSafe Bridport in Dorset, which greatly improves the safety of our forces…Development continues for a full vehicle armour which would be lighter – reducing fuel use and vehicle maintenance, greatly reducing the cost of operations.”

AmSafe Bridport is the world’s leading provider of safety restraint products for the aerospace, defence, specialty and vehicle industries. We have made great strides with our engineered textile solutions and we manufacture unique products such as the seatbelt airbag, an RPG net protection system, airframe barrier nets, lightweight cargo nets and restraints, and of course, the product we are most known for – the aviation passenger seatbelt. We are also the first and only company to have a seatbelt airbag system installed worldwide on both commercial and general aviation aircraft. Our products are used in both commercial and general aviation, in military and civilian applications, on specialty vehicles and can be found in automotive child seats. Protecting passengers is a priority to AmSafe Bridport and our products help move millions of people and countless tons of cargo safely and securely in the air and on the ground. 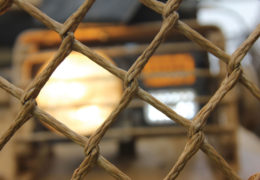