AmSafe Bridport Limited has been awarded a contract from the French Direction Générale de L’armement (DGA) for its requirement for a multipurpose helicopter transport system [designated as système d’hélitransport polyvalent; (SHP)] for the French Armed Forces helicopter fleet.

The SHP is a suite of specialist helicopter cargo lifting equipment capable of safely and efficiently transporting a wide range of cargo loads, both internally and underslung. The contract is for the supply and support of 256 sets of equipment over a period of seven years. The equipment will be utilised on a wide range of French armed forces helicopters including NH-90, Puma, Super Puma, Cougar and Caracal.

Most of the equipment to be supplied is designed and manufactured by AmSafe Bridport, including its unique QuickDrop remote controlled pendent and hook system which allows loads to be safely dropped by the helicopter crew without the need for the presence of ground crew. QuickDrop enables faster detachment of cargo loads with reduced risks to troops on the ground.

The contract was awarded after a competitive tendering process and is valued at €12.5m.

Ian Kentfield, President of AmSafe Bridport reflected:
“This significant defence systems contract, coming almost exactly one year after AmSafe Bridport secured a contract to supply its Tarian® Rocket Propelled Grenade protection system to the UK MOD, plus recent success in the commercial aviation sector with the launch of its fire containment cover with UPS and ultra-light weight pallet nets with KLM- Royal Dutch Airlines demonstrates the success of the company’s strategy to focus on key market niches where it has developed a thorough understanding of customer needs and is able to harness its innovative skills and unique capabilities to provide world class solutions for global aerospace and defence markets. 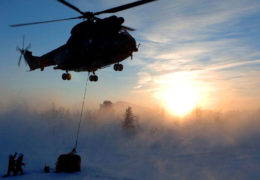