New and updated Good Distribution Practice (GDP) requirements demand that the pharmaceutical industry sits up and takes notice of the importance of a quality assured policy to ensure temperature-sensitive products are consistently stored, transported and handled. Isabelle Broom from the Cargo Product Line at AmSafe Bridport explores the topic.

A revised process for review of GDP deficiencies was undertaken by the Medicines and Healthcare products Regulatory Agency (MHRA)* in 2011 in order to keep pace with the rapidly changing supply chain environment and improve customer focus.

The deficiencies reported referred to non-compliance areas from quarterly inspections of a sample of approximately 50 individual companies. The results found that the incidence of deficiencies in Temperature Control and Monitoring was as high as 24% across the study and importantly 56% of those incidences were considered major deficiencies. The deficiencies were found in general storage, temperature mapping, cold chain transportation, cold storage and cold chain packaging.

Temperature recording was found to be deficient and there was no system in place to address temperature excursions. Where excursions existed there were often inadequate assessments of the quality impact and although corrective actions were sometimes put in place, they were not recorded appropriately and there was no documented assessment of corrective actions to address the problem. The report found that investigations of problems associated with temperature excursions were extremely rare.

The MHRA recommended that temperature mapping exercises taken at times of environmental extremes were necessary to enable adequate temperature control measures to be put in place and excursions avoided.

New and updated GDP guidelines were introduced in September 2013 as a direct result of the MHRA review of GDP Deficiencies in 2011. The new guidelines require that pharmaceutical products are consistently stored, transported and handled within specified temperature zones, as defined on the label or as supported by stability data.

Specifically, this has brought greater focus and scrutiny on the “controlled (ambient) room temperature (CRT)” products, which now must be maintained within specified temperature zones, even under extreme conditions, to ensure proper product quality is maintained during all aspects of the global distribution process. However, unforeseen breaks in an otherwise safe supply chain, such as longer transit times, complex customs procedures and extended times on the tarmac are increasingly exposing CRT product to extremes of temperatures.

Using data from extensive trials with partner airlines and pharmaceutical companies, DuPont™ developed an enhanced Air Cargo Cover for the pharmaceutical industry that adhered to the revised GDP guidelines. This provided an enhanced performance from their existing white/white standard cover.

DuPont™ then collaborated with AmSafe Bridport, who is known globally for its cargo protection and restraint expertise, compiling extensive test data, both in its own cold chambers and external independent test houses, to ensure these air cargo covers were fully validated to give the customer peace of mind. They also undertook numerous live trials and developed test plans to help provide a thermal solution that meets their customers’ operational requirements.

The DuPont™ Tyvek® Air Cargo Cover was brought to market designed for single/limited use. Tyvek® is an exceptional non-woven material that shields shipments from heat, cold and solar radiation during transport.

As a global leader in selective barrier technology, Tyvek® brings new dimensions of protection, security and safety in a wide variety of industries. Its unique properties mean that not only are they water resistant (protecting against heavy rain and hail), but they are also breathable, reducing condensation and allowing oxygen to reach produce to guard against irreversible damage and extend product life.

The use of this lightweight, reflective barrier solution is an inherently efficient method for mitigating upward temperature excursions in comparison to conductive barriers with high R-values. Because of the low thermal conductivity, in the absence of direct sun, these covers also retard equilibration of undercover temperature with the ambient air temperature.

The reflective material provides a high level of thermal protection from solar radiation, reducing the damaging effects of the heat and keeping shipments naturally cooler than other covers on the market. The lightweight and flexible Tyvek® Air Cargo Cover also ensures that the user is benefiting from quick and easy handling, reduced airfreight volume and compact storage.

Their first Tyvek® Air Cargo Cover was introduced in 2011 in Rotterdam. Companies who have been using these covers appreciate that their temperature-sensitive products are protected from both the high and low temperature spikes that occur during the transportation of their cargo.

Where could temperatures >70°C come from?

In response to the revised GDP Guidelines, DuPont™ Protection Technologies undertook a study to investigate the effect of sun radiation on cargo. This was of particular interest following an industry discussion on how a pallet of product reached 70°+C when the ambient temperature remained at 35°C. The study compared different types of packaging materials, including thermal covers, to estimate potential protection on the tarmac and in transit for temperature-sensitive products.

The study took place in Homestead, Florida (26° North Latitude) in typical ambient temperatures between 15°C to 32°C. The test was 72 hours from March 22nd – 24th, 2013 (inclusive). Data loggers were placed at the known risk areas of the pallet, such as the top corners.

Most packaging professionals understand that the perceived performance of secondary packaging and protective cover materials intended to mitigate temperature excursions in the cargo is greatly influenced by the amount of thermal mass being protected and the conditioning temperatures of such mass. Some consider empty boxes as the worst case. The study therefore used empty boxes, 381x381mm in dimension, built up on Euro pallets measuring 1,220mm in height.

To wrap or not to wrap?

One of the industry’s most commonly used packaging materials is clear stretch wrap. Unsurprisingly, this proved to be the worst performing of the materials tested in the study. Not only did clear stretch wrap provide no screening of the sun’s radiant energy, but it acted like a greenhouse by trapping heat, allowing the temperature to increase beyond the ambient temperature to 76°C, giving the highest reading in this study.

Black stretch wrap performed better although the dark colour absorbed heat energy and provided some screening from the sun, reaching 52°C under the cover. In comparison, white film provided some screening from solar energy and temperatures of 39°C were reached. Whilst film has utility for load stabilisation, it does not provide adequate protection and may even be counter productive when the greenhouse effect is taken into account.

When thermal covers were introduced to the study, there was a marked improvement in the control of temperature. They offer reduced product deterioration by lowering exposure to sudden ambient temperature changes.

In addition, when the DuPont™ Tyvek® Air Cargo Cover was introduced, moisture control improved with the added benefit of reduced product deterioration by allowing excessive moisture to escape.

The enhanced product can avoid extreme temperatures because of exceptional reflective properties of both visible and IR radiation wavelengths and allows excessive humidity to escape reducing the probability of condensation damage.

A number of thermal cover solutions are available on the market to support air cargo logistics around the globe. These are currently being used by pharmaceutical companies, logistical companies, cargo handlers and airlines striving to adhere to the revised GDP guidelines.  Products such as the DuPont™ Tyvek® Air Cargo Cover are a solution not to be ignored in managing the transit and storage of temperature-sensitive products. 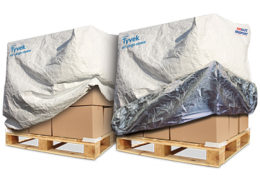