AmSafe Bridport Limited is displaying its Tarian® RPG Armour at the Singapore Air show from 11th – 16th February 2014. This revolutionary, lightweight and durable armour is fitted to a Singapore Technologies Kinetics’ Bronco located on ST Kinetics’ stand G01. This is the first time their latest technological advances, including a fully flexible mounting system, has been shown in Asia/Singapore and builds on the relationship established through the MOU signed on 14th September 2011.

It is this most recent system which is now fitted to a variety of UK military vehicles following the company’s £10.6M contract award from the UK MOD on 21st December 2012. Tarian® RPG Armour is a highly effective solution for protection against RPGs and also the world’s lightest. Developed in close collaboration with the UK Ministry of Defence (MOD), the Tarian® system has been extensively tested – including over 750 live shots – in the UK, France and the USA. This testing has verified Tarian’s high level of performance and multi-hit capability. Tarian® was launched in 2009 and is currently in service fitted to a wide range of vehicles deployed by the British Army in Afghanistan.

At the Singapore Air Show, AmSafe Bridport is taking the opportunity to announce the recent appointment of Matthew Chuter as Product Line Manager – Tarian®, responsible for its global business activities. Additionally, in response to the very significant international interest in Tarian®.

AmSafe Bridport has expanded its UK- based sales team and its Tarian® marketing team with the establishment of a dedicated North American operation (based in Erie, Pennsylvania, USA).

Neal McKeever, Sales & Marketing Director of AmSafe Bridport, said:
“The Singapore Air Show is a fantastic opportunity for AmSafe Bridport to present Tarian® to the Far East market. It is understandable that international interest has been growing hugely since Tarian® has been proven both in rigorous trials and in theatre with the British Army.” 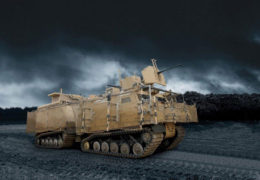