For some time the industry has expressed concern over potential fire hazards when transporting goods such as lithium ion batteries in aircraft cargo holds. Subsequently manufacturers and airlines are all beginning to take note after continuing reports of fire incidents and fatal crashes.

The brief was to look at how the company can increase awareness and sales of their fire containment products by creating a brand name and logo that will resonate within their market and with a wider audience. The inspiration and foundation for the brand name came from how “the earth’s mantle protects and contains a volatile core.”

The objective in branding this part of the business with Mantle is to elevate the selection of products so Mantle effectively becomes synonymous with fire containment in the commercial aviation and freight forwarding sector. Mantle was considered as a relevant and viable name to help express the efficacy of their product range. Linking the name with fire containment and other sales points in strap lines and supporting copy creates a powerful message and adds value to the overall proposition.

Mantle is a metaphoric name meant to evoke a sense of strength, protection and stability…” says Tharindu Senanayaka, Business Manager at AmSafe Bridport, “…long term we see Mantle working in isolation (and representative of all fire containment covers) as our market accepts and relates to a brand that resonates quality and leadership, potentially evolving into a generic brand within our industry and even further afield.”

The AmSafe Bridport Fire Containment Cover was the world’s first to be awarded a both a Technical Standard Order (TSO) by the Federal Aviation Authority (FAA) and European Standard Order (ETSO) by The European Aviation Standards Authority (EASA) answering the demands of both the industry and its regulators. Ultimately companies like AmSafe Bridport are not just looking to manufacture covers to contain fires – their products are designed to save lives.

Recently their Fire Containment Cover proved its capability by suppressing a lithium ion fire on a major airline.

The launch of Mantle can be seen at WCS in Dallas, USA between the 13th and 15th March 2018 where AmSafe Bridport will be exhibiting on stand 102. 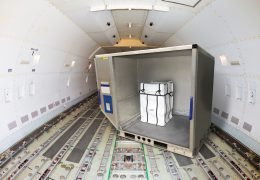