A pallet cover that diminishes the risk of fire associated with shipping dangerous goods.

AmSafe Bridport Ltd, the leading provider of engineered restraint systems to the aviation, defence and specialty vehicle markets, today announced the introduction of its Fire Containment Cover which is designed to ensure the safety and integrity of palletised cargo during a fire event.

AmSafe Bridport’s Fire Containment Cover operates as a passive system which keeps a fire isolated from other cargo being transported on an aircraft. Designed for palletised loads, the AmSafe Bridport Fire Cover is comprised of a patented fire retardant fabric with a detachable QuickZip® Pallet Net, and can contain a fire with temperatures of up to 1500 ºF (815 ºC) for up to six hours. This combination of net and fabric cover provides a two-way fire barrier that effectively isolates each cargo position and prevents any fire from spreading and escalating. The AmSafe Bridport Fire Containment Cover suppresses the localised threat through oxygen starvation.

Fire is a growing concern in the air shipment of cargo. When products are shipped in accordance with regulations, the risk posed is relatively minor; the risk of fire increases with the possibility that shipments contain either goods which are improperly categorised or undeclared hazardous materials. Items such as mobile devices and electronic products are a particular risk as they may contain high-capacity rechargeable batteries and other active elements. Transporting electronic and mobile devices only becomes a risk if they are not properly identified and packaged prior to being combined with other cargo on a pallet.

“The rise in consumer Internet trading has led to a massive increase in the transportation of high-tech equipment around the world and it is often not appreciated that these goods can cause serious fires if not correctly categorised and protected for shipment”, said Ian Kentfield, senior vice president of AmSafe Bridport. The design of our fire cover allows the safe global shipping of high-technology products, and at the same time reduces the fire concerns expressed by cargo carriers and commercial airlines.

The AmSafe Bridport Fire Containment Cover has many applications but it is primarily designed for palletised loads being shipped in the currently unprotected Class E compartments found on the main deck of the majority of freighter aircraft. It is also intended to be used to protect the remaining Class D under-floor holds that are still in operation. While this is currently a voluntary safety improvement, AmSafe Bridport is actively supporting the development of international aerospace standards for design, performance and testing. These standards will form the basis of a future FAA Technical Standards Order for Fire Containment Covers.

AmSafe Bridport Ltd is headquartered in Bridport, Dorset, UK and has subsidiaries in the United States of America and Sri Lanka. At its Bridport UK facility AmSafe Bridport designs and manufactures cargo handling and airframe products for both commercial aviation and defence; provides MRO services for airframe products; and designs and manufactures RPG protection systems for use by the military. 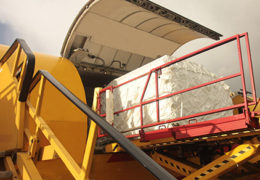