There has been a dramatic rise in in-flight cargo fires. In response, on 1st July 2014, the FAA issued TSO-C203 to provide a minimum standard by which manufacturers can design, build and supply a fully certified Fire Containment Cover (FCC).

AmSafe Bridport is the first manufacturer to be granted the TSO-C203 for their Fire Containment Cover.

The system which includes a fire cover, pallet net and patented deployment kit follows 10 years of development, testing and trials which has resulted in over 1,000 FCCs in operational use. The result is a product that not only meets the requirements of TSO-C203 but actually exceeds the minimum standard.

This solution helps mitigate the risk of ‘on board’ fires ignited by undeclared dangerous goods being transported on palletised loads, and is already the solution of choice for a number of major global cargo carriers – answering the demands of both the industry and the regulators.

AmSafe Bridport’s Joe Ashton: “With the continued increase of high tech electronic equipment containing lithium batteries being shipped by online traders unaware of the dangerous goods regulations, the risk of the next major cargo fire is high. On average, the pilot and crew have just 17 minutes from the initial notification of an ‘on board’ fire, to safely land the aircraft. With our FCC protecting your load we can now extend the protection time, up to 6 hours, for those on board. At AmSafe Bridport we are committed to providing innovative, safety critical cargo restraints and by being the first with TSO-C203, we are pleased to reinforce this ethos.” 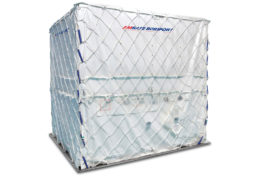